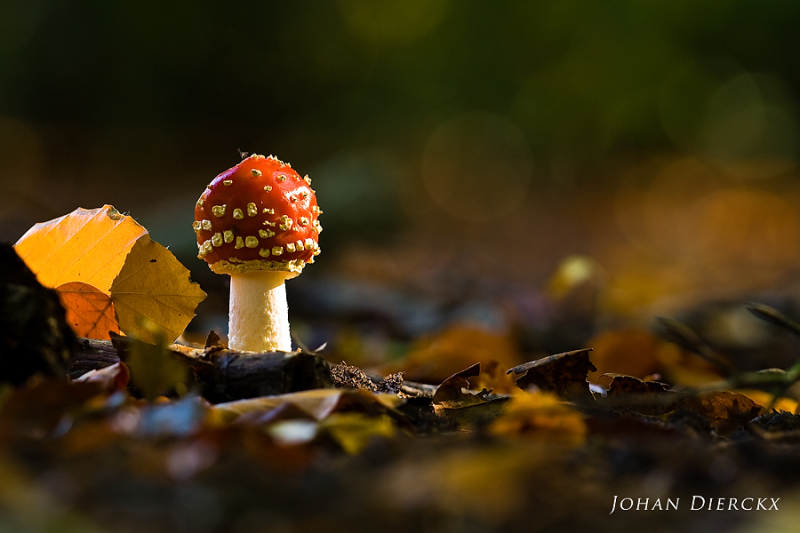 Posted by Johan Dierckx (Wijnegem, Belgium) on 9 December 2012 in Plant & Nature and Portfolio.

Amanita muscaria (NL: Vliegenzwam / EN: Fly agaric, Fly amanita / DE: Fliegenpilz / FR: Amanite tue-mouches, Fausse oronge) - is a cosmopolitan, poisonous and psychoactive basidiomycete fungus in the Amanitaceae family. Because this is perhaps the best known mushroomspecies in the entire world, I will not provide a description today.

But have you ever wondered why there is a reference to flies in the common names of this species ? Even the specific epithet in the scientific name derives from the Latin word "musca" meaning "fly". Albertus Magnus wrote in his work "De vegetabilibus" sometime before 1256: vocatur fungus muscarum, eo quod in lacte pulverizatus interficit muscas ("It is called the mushroom of flies, because crushed in milk it kills flies"). This practice has been recorded from Germanic- and Slavic-speaking parts of Europe, as well as the Vosges region and pockets elsewhere in France, and Romania.

Today the red-and-white spotted toadstool is a common image in many aspects of popular culture, especially in children's books, film, garden ornaments, greeting cards, and more recently computer games. Garden ornaments, and children's picture books depicting gnomes and fairies, such as the Smurfs, very often show fly agarics used as seats, or homes. Two of the most famous uses of the mushroom are in the video game series Super Mario Bros., and the dancing mushroom sequence in the 1940 Disney film Fantasia.

But there is no greater delight than finding this species in real nature and I just can't resist to make images of this species at least once every year ...

Fabulous, I expect a fairy to appear any moment

Incredible photo. I love the small world-feel it has, like it's own world in this frame.

This image has been featured in 1 Remix collection.