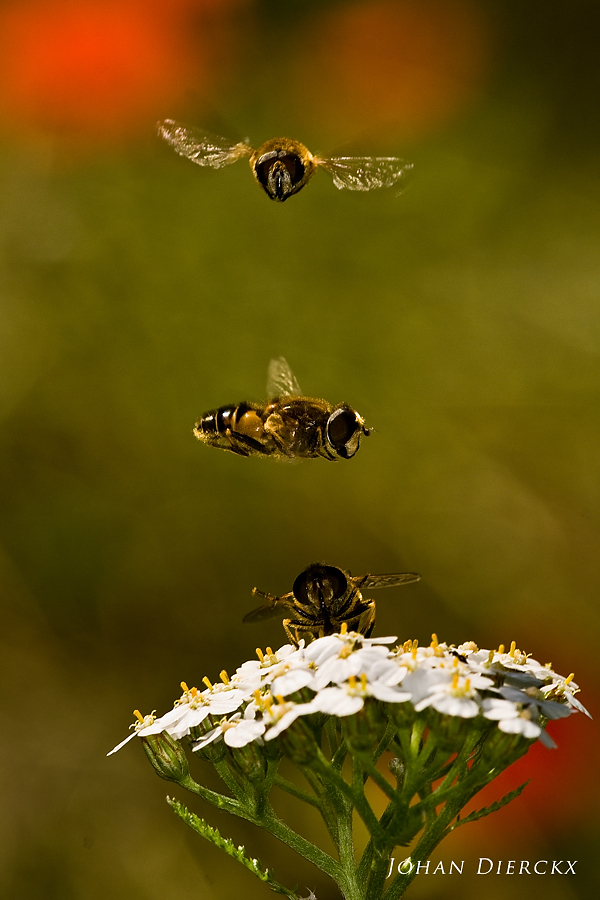 Posted by Johan Dierckx (Wijnegem, Belgium) on 8 October 2012 in Animal & Insect and Portfolio.

Eristalis interrupta males show a characteristic hovering behaviour above females sitting on a flower. It is part of the courtship display of the species.

A male may hover one or two centimetres above a female for minutes. The female may move over a flower and rotate, the male mostly hovers steadily with the axis of the body remaining approximately in the same direction. It sometimes even occurs that a second male is hovering above the first male. (see image !) Disturbances of for example females on moving flowers due to wind are of only minor influence on the hovering behaviour. The ability of the male in controlling its position above the female in these circumstances is very impressive.

This behaviour is ideallly suited to the application of control system theory. The males are capable of closely following a female in the horizontal direction. Information about the reference point is available when the female is rotating relatively fast. A male may use different reference points on the body of the female. When the female is making a jump to another flower, the male only loses control for 0.1 to 0.2 second and afterwards is following the female again. The control of vertical distance is also very tight. After a jump of the female in the vertical direction the male chooses at first a larger distance, this distance is decreasing with a time constant of the order of a second to the final distance. When two males are hovering above a female the male at the largest distance from the female is probably following the first male in the horizontal direction.

Fantastic image, so simple and I love simple.

Congratulations on your SPOTLIGHT!

What a great macro shot ... congratulations!

And thank you for all that info :-)

Wow ...Superb !! Congratulations on the spotlight !

Stu from From Scotland | Living in 京都 Kyoto, Japan

This image has been featured in 5 Remix collections.

In Motion by Viewfinder