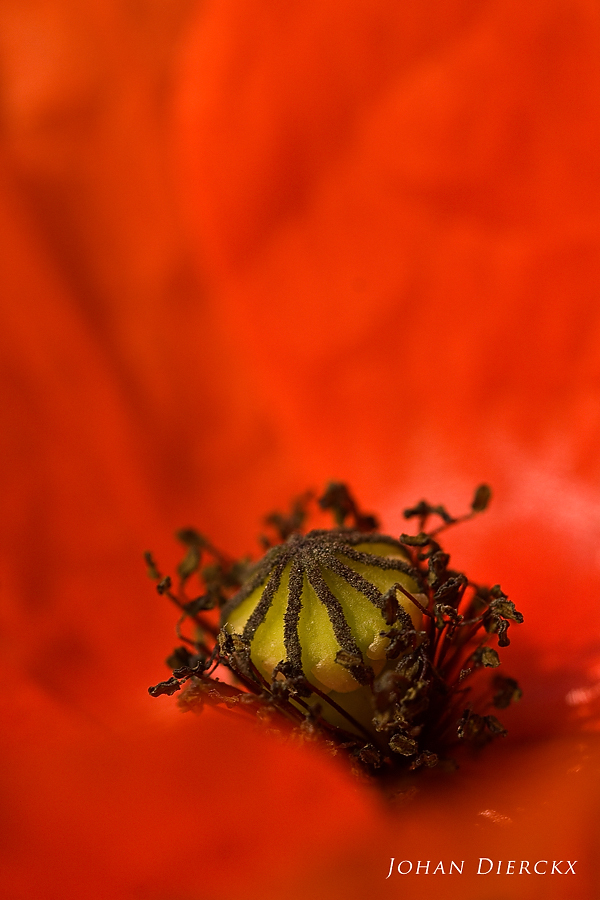 Posted by Johan Dierckx (Wijnegem, Belgium) on 24 June 2012 in Plant & Nature and Portfolio.

Papaver rhoeas (NL: Grote klaproos / EN: Corn poppy, Corn rose, Field poppy, Flanders poppy, Red poppy, Red weed, Coquelicot / DE: Klatschmohn, Mohnblume, Klatschrose / FR: Coquelicot, Ponceau, Pavot coquelicot, Pavot rouge) is a species of flowering plant in the poppy family, Papaveraceae. The plant is a variable annual, forming a long-lived soil seed bank that can germinate when the soil is disturbed. In the northern hemisphere it generally flowers in late spring, but if the weather is warm enough other flowers frequently appear at the beginning of autumn. The flower is large and showy, with four petals that are vivid red, most commonly with a black spot at their base. Like many other species of Papaver, it exudes a white latex when the tissues are broken. Due to the extent of ground disturbance in warfare during World War I, corn poppies bloomed in between the trench lines and no man's lands on the Western front. Poppies stand as a prominent feature of "In Flanders Fields", one of the most frequently quoted English-language poems composed by front-line personnel during the First World War. During the 20th century, the wearing of a poppy at and before Remembrance Day each year became an established custom in most western countries.

wow what a color plus you see it is a flower, amazing pov...