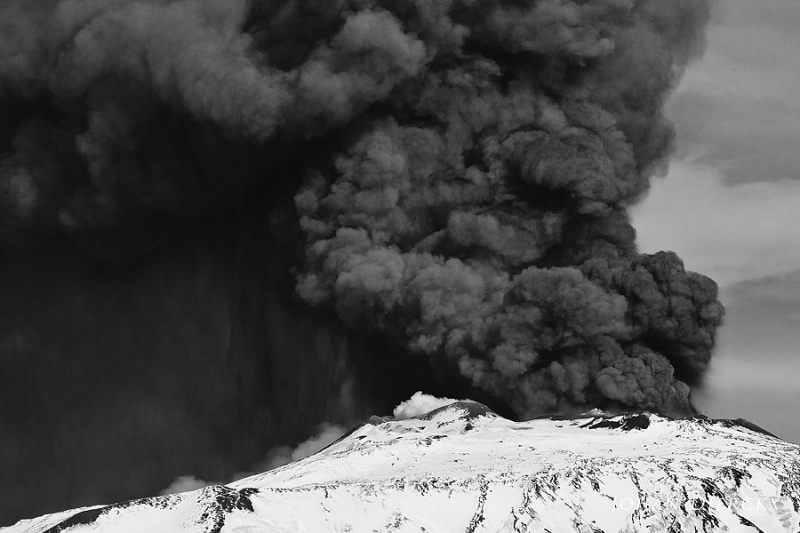 Posted by Johan Dierckx (Wijnegem, Belgium) on 27 May 2012 in Landscape & Rural and Portfolio.

During the afternoon of 12 April 2012 a brief but violent eruption with lava fountains (paroxysm) took place at Etna volcano. It was the 24th episode of the series that began on 12 January 2011 (the sixth since the beginning of 2012) from the new cinder cone southeast of the SE crater, called the "New SE crater". Strombolian activity had started on the evening of 10 April, and intensified during the night 11-12 April and on the morning of 12 April, with explosions from the summit vent of the cone becoming more and more energetic and regular. At 14:17 local time, a vent was reactivated on a segment further upslope on the eruptive fissure on the southeast side of the NSEC and began issuing a slow lava flow. Ten minutes later, the same vent initiated weak spattering. Almost simultaneously the strombolian activity, which had remained fairly stable during the previous hour, began to gradually increase. During this phase, the formation of at least 3 gas rings were observed, which rose several hundred meters above the crater and then dissipated. At about 15:15 the first weak and intermittent lava fountains started from the summit vent of the cone. The activity of spattering from the eruptive fissure had gradually intensified producing real strombolian explosions that, around 16:00, became very intense, throwing volcanic bombs size of meter size until the base of the cone.
At around 16:10 another lava flow was observed to be erupted from the gap formed after the collapse of the northeastern portion of the cinder cone on 1 April, but it was not possible to assess whether it was produced by the reactivation of the fissure opened during that activity, or whether it was generated by an overflow due to an increase in lava discharge rate from the other vents. Between 16:20 and 16:30 the activity suddenly intensitied and formed sustained lava fountains, first from the summit vent, then later from several other vents aligned along the eruptive fissure on the southeastern flank. The largest of these lava fountains produced spectacular sprays directed towards the Valle del Bove. ]The fountaining generated a column of gas and tephra that has rose a few km above the volcano and was then bent by the winds to the east. The activity remained almost constant for about half an hour, when, at around 17:00, the vent at the top of the cone stopped fountaining and started to produce impressive ash emissions. (see image!) The activity decreased sharply around 17:15. During this phase, the lava flows travelling into the Valle del Bove in contact with snow generated huge lahars that produced large clouds of steam that rose some hundreds of feet above the valley floor. The ash emission stopped at around 17h40 and all activity stopped a few tens of minutes later. The most advanced lava flow fronts reached at 1950 meters above sea level in the Valle del Bove. A second lava flow was erupted from the fissure on the north side of the cone, and reached some 100 m length.
---
(Source: EtnaWalk)