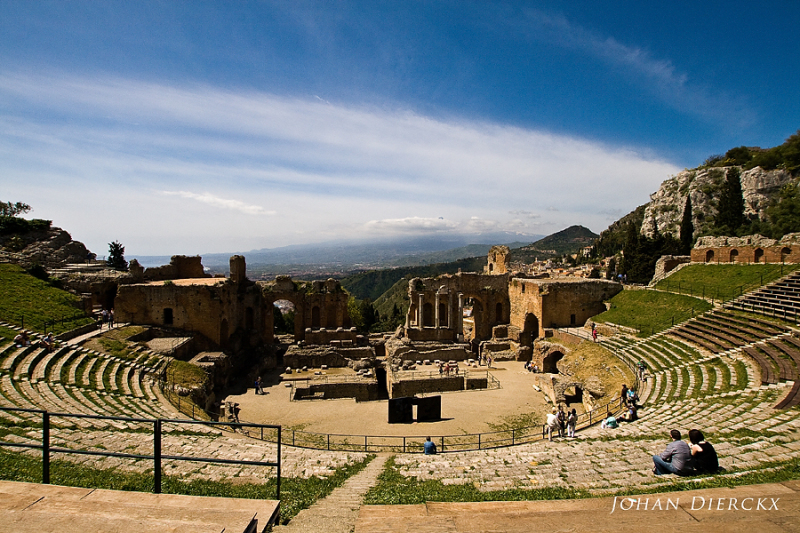 Posted by Johan Dierckx (Wijnegem, Belgium) on 25 May 2012 in Cityscape & Urban and Portfolio.

Taormina is a comune and small town on the east coast of the island of Sicily, Italy, in the Province of Messina, about midway between Messina and Catania. Taormina has been a very popular tourist destination since the 19th century. By by far the most remarkable monument remaining at Taormina is the Ancient theatre, which is one of the most celebrated ruins in Sicily, on account both of its remarkable preservation and its beautiful location. It is built for the most part of brick, and is therefore probably of Roman date, though the plan and arrangement are in accordance with those of Greek, rather than Roman, theatres; whence it is supposed that the present structure was rebuilt upon the foundations of an older theatre of the Greek period. With a diameter of 109 metres (after an expansion in the 2nd century), this theatre is the second largest of its kind in Sicily (after that of Syracuse); it is frequently used for operatic and theatrical performances and for concerts. The greater part of the original seats have disappeared, but the wall which surrounded the whole cavea is preserved, and the proscenium with the back wall of the scena and its appendages, of which only traces remain in most ancient theatres, are here preserved in singular integrity, and contribute much to the picturesque effect, as well as to the interest, of the ruin. From the fragments of architectural decorations still extant we learn that it was of the Corinthian order, and richly ornamented. Some portions of a temple are also visible, converted into the church of San Pancrazio, but the edifice is of small size.

Reminds me my travel in Sicily in 2002, and in Taormina too. Lovely place.

wonderful wide view of this ancient place! well composed and captured on a beautiful day!