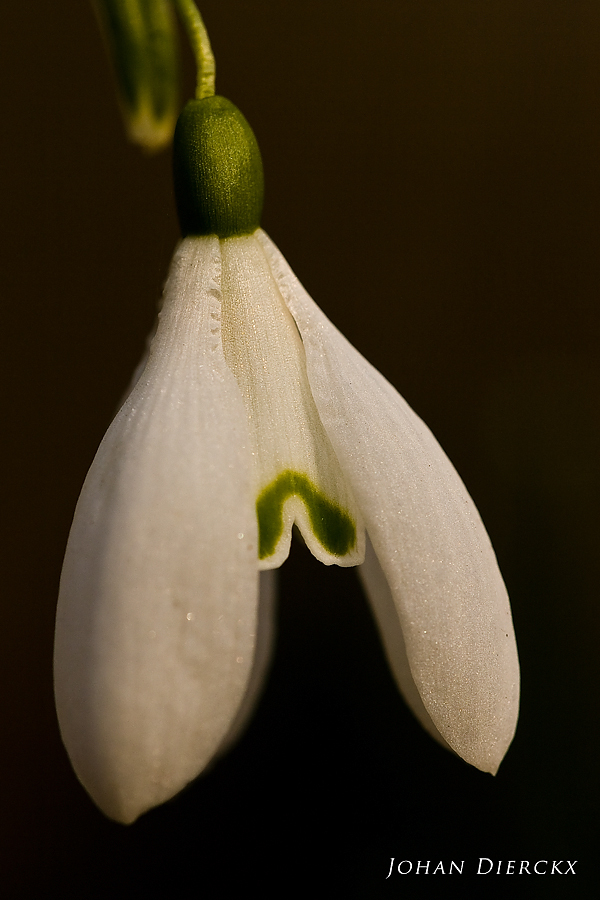 Posted by Johan Dierckx (Wijnegem, Belgium) on 7 March 2012 in Plant & Nature and Portfolio.

Galanthus nivalis (NL: Gewoon sneeuwklokje / EN: Common snowdrop / DE: Kleine Schneeglöckchen, Gewöhnliches Schneeglöckchen / FR: Perce-neige, Clochette d'hiver, Galanthe des neiges) is among the first bulbs to bloom in spring and can form impressive carpets of white in areas where they are native or have been naturalised. The generic name Galanthus, from the Greek gala (milk) and anthos (flower), was given to the genus by Carl Linnaeus in 1735. He described Galanthus nivalis in his Species Plantarum published in 1753. The epithet "nivalis" means "of the snow", referring either to the snow-like flower or the plant's early flowering. Galanthus nivalis is widely grown in gardens, particularly in northern Europe, and is widely naturalised in woodlands in the regions where it is grown. It is, however, native to a large area of Europe. In Belgium the species is considered as an archaeophyte (a plant species which is non-native to a geographical region, but which was an introduced species in "ancient" times (before 1492), rather than being a modern introduction.) The populations near Antwerp are considered as the oldest in Belgium and are mentioned already in 1581 by Mathias de l'Obel. Every year I look forward to visit these populations: they announce spring to me ...

wow, this is really amazing ...

@Nazzareno: Thank you very much for your visit and comment, Nazzareno.

@Loner: Sonja, a little more comment on the color of these: The flower of these snowdrops appears white but is actually colorless. A squeezed petal appears to be clear, because the air bubbles between the leaf cells are then squeezed. It is this air that reflects the incoming sunlight in all directions, so that the person perceives it as white. By making a macro this close you can almost see the individual cells that compse the petals. These cause the silky sheen ... Thanks for your comment and enjoy the weekend !