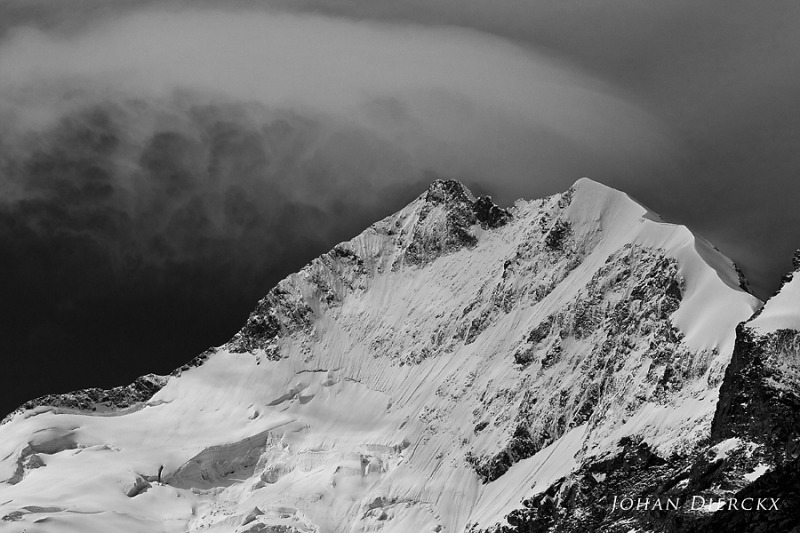 Posted by Johan Dierckx (Wijnegem, Belgium) on 1 November 2011 in Landscape & Rural and Portfolio.

Piz Bernina (4,049 m) is one of the few isolated four-thousanders in the Alps. It is the culminating point of a group of summits slightly lower than 4000 m mostly lying on the main watershed between Switzerland and Italy.
It is the highest mountain of the Eastern Alps and is also the farthest easterly mountain higher than 4,000 m in the Alps, the highest point of the Swiss canton of Graubünden, and the fifth-most prominent peak in the Alps. Piz Bernina is located near St. Moritz, one of the best known resorts in the Swiss Alps. The rocks composing Piz Bernina are diorites and gabbros. The massif in general is also composed of granites. Most of the range belongs to the Austroalpine nappes, a tectonic unit whose rocks come from the Apulian plate, a small continent which broke away from Africa (Gondwana) before the Alpine orogeny. The Austroalpine nappes are common in the entire Eastern Alps. The north ridge, called the "Biancograt" or "Crast Alva" - both meaning "White Ridge" (see image), is the most well-known and attractive route to the summit, and is much more difficult than the normal route.

Amazing! I love the ruggedness of the Alps. Great photograph!