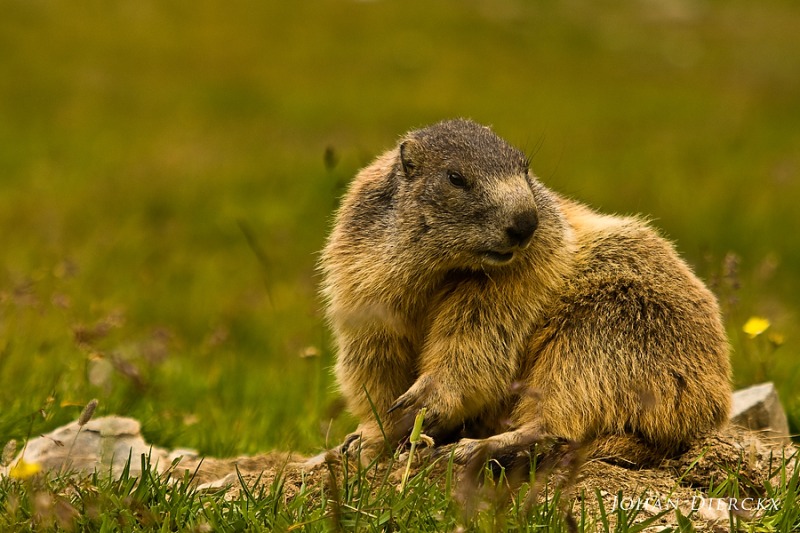 Posted by Johan Dierckx (Wijnegem, Belgium) on 21 October 2011 in Animal & Insect and Portfolio.

Marmota marmota (NL: Alpenmarmot / EN: Alpine Marmot / DE: Alpenmurmeltier / FR: Marmotte des Alpes).
The Alpine marmot is endemic to Europe. Its core range extends through the Alps of France, Italy, Switzerland, Germany and Austria. An adult alpine marmot may weigh between 4 and 8 kg, stand at 18 cm at the shoulder, and reach between 42–54 cm in length (not including the tail, which measures between 13–16 cm on average). This makes the alpine marmot the largest squirrel species. Its coat is a mixture of blonde, reddish and dark gray fur. While most of the alpine marmot's fingers have claws, its thumbs have nails. It inhabits alpine meadows and high-altitude pastures, typically on south-facing slopes from 1.200-3.000 m. (although it is occasionally found at lower altitudes). They are excellent diggers, able to penetrate soil that even a pickaxe would have difficulty with and colonies inhabit deep burrow systems in alluvial soil or rocky areas. When creating a burrow, they use both their forepaws and hind feet to assist in the work - the forepaws scrape away the soil, which is then pushed out of the way by the hind feet. If there are any stones in the way, the alpine marmot will remove them with its teeth provided that the stones aren't too large. "Living areas" are created at the end of a burrow, and are often lined with dried hay, grass and plant stems. Any other burrow tunnels that go nowhere are used as toilet areas. Once burrows have been completed, they only host one family, but are often enlarged by the next generation, sometimes creating very complex burrows over time. Each alpine marmot will live in a group that consists of several burrows, and which has a dominant breeding pair. Alpine marmots are very defensive against intruders, and will warn them off using intimidating behaviour, such as beating of the tail and chattering of the teeth, and by marking their territory with their scent. One can often see an alpine marmot "standing" while they keep a look-out for potential predators or other dangers. If one is spotted, they will emit a loud whistle or chirp - one whistle is given for possible airborne predators, more for ground predators. It has a herbivorous diet, primarily composed of green parts of grasses, sedges, and herbs. They spend up to nine months per year in hibernation. Although not currently in any danger of extinction, alpine marmots used to be widely hunted due to the belief that their fat would ease rheumatism when rubbed on the skin. However, hunting of the alpine marmot still occurs for sport purposes. This is a danger to the species, as they are relatively slow at breeding.