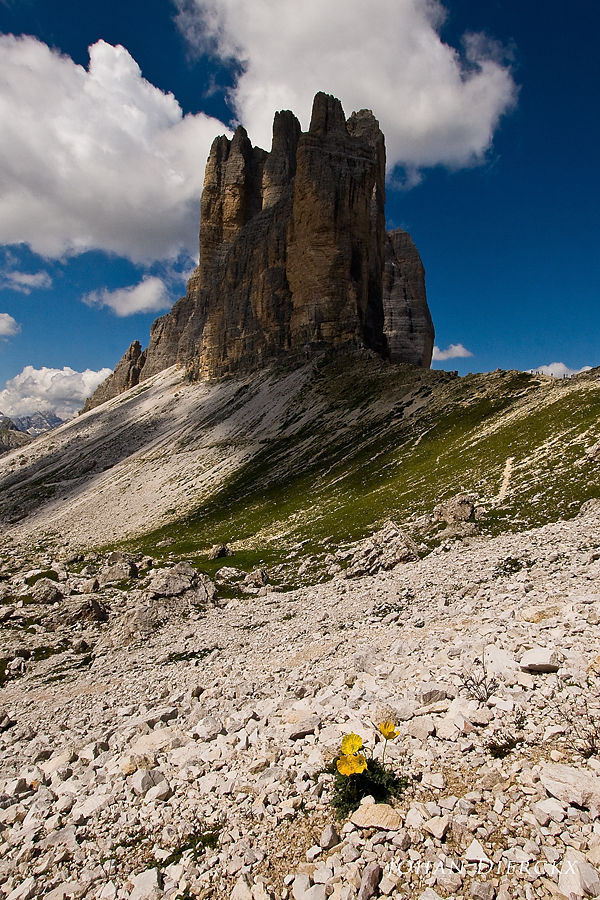 Posted by Johan Dierckx (Wijnegem, Belgium) on 22 August 2011 in Landscape & Rural and Portfolio.

The Tre Cime di Lavaredo (Italian for "the three peaks of Lavaredo"), also called the Drei Zinnen (German, literally "three merlons"), are three distinctive battlement-like peaks, in the Sexten Dolomites of northeastern Italy. They are probably one of the best-known mountain groups in the Alps. The three peaks, from east to west, are:

This image is a side view from Forcella Lavaredo / Paternsattel where mainly the eastern peaks can be seen : Punta di Frida (2.792 m) and Preußturm (Kleinste Zinne Torre Preuß, Cima Piccolissima) (2.700 m).

The peaks are composed of well-layered dolostones of the Dolomia Principale (Hauptdolomit) formation, Carnian to Rhaetian in age, as are many other groups in the Dolomites.

Excellent work! At first glance I found it a pity the the peak was covered by the shadow, but in reality it does add colour-depth to the photo (love the detail of the flower in the foreground).

Incredible composition with that lone flower acting as the lead in - a great shot.