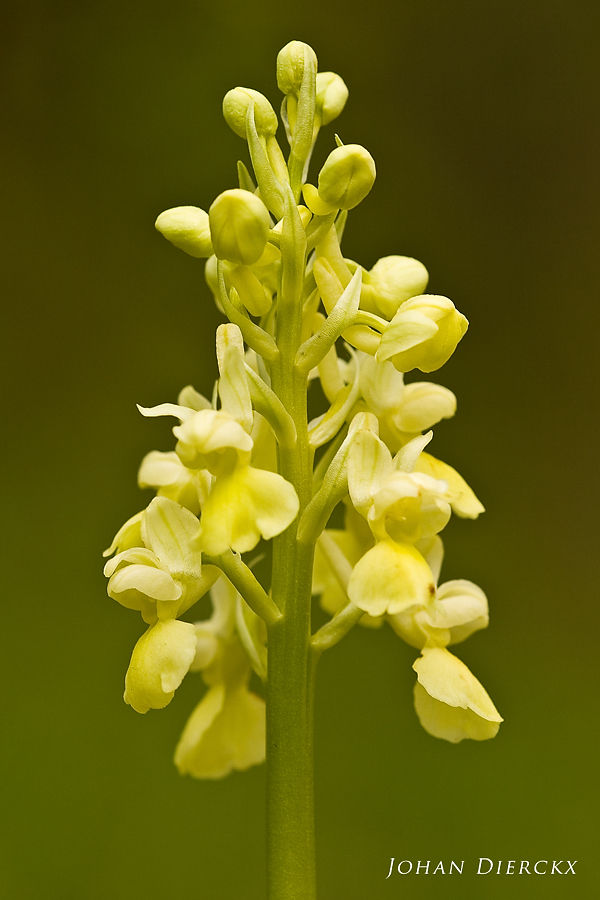 Posted by Johan Dierckx (Wijnegem, Belgium) on 25 May 2011 in Plant & Nature and Portfolio.

Series: Images of a botanical trip to the Free State of Thuringia (German: Freistaat Thüringen) in Germany from 15 - 19/04/2011

Orchis pallens (NL: Bleke orchis / EN: Pale orchid / DE: Blasse Knabenkraut) is a yellow coloured species in the genus Orchis. For many years the species was known as O.sulphurea and this was an appropriate name given that its colour has a much more sulphurous tone to it than the other two yellow members of the genus: Orchis pauciflora and Orchis provincialis. "Pallens" simply means pale and this seems to somewhat understate the appearance of the plant. In terms of identification, it can be readily distinguished from Orchis pauciflora and Orchis provincialis by virtue of the total lack of lip markings. A further key characteristic is the leaves, which are large, shiny and form a spreading rosette. This orchid is largely, though not quite exclusively a montane species and may be found growing up to around 2500m on predominently calcareous soils and more often than not in light shade at woodland edges, either deciduous or coniferous. Its range is sizable and encompasses all the significant mountain ranges of Europe but it is nowhere common and in many area's extremely rare. In Thuringia the species reaches its Northern border. In Belgium the species never occured ans so finding this early flowering orchid was one of the main goals of my trip to Germany.