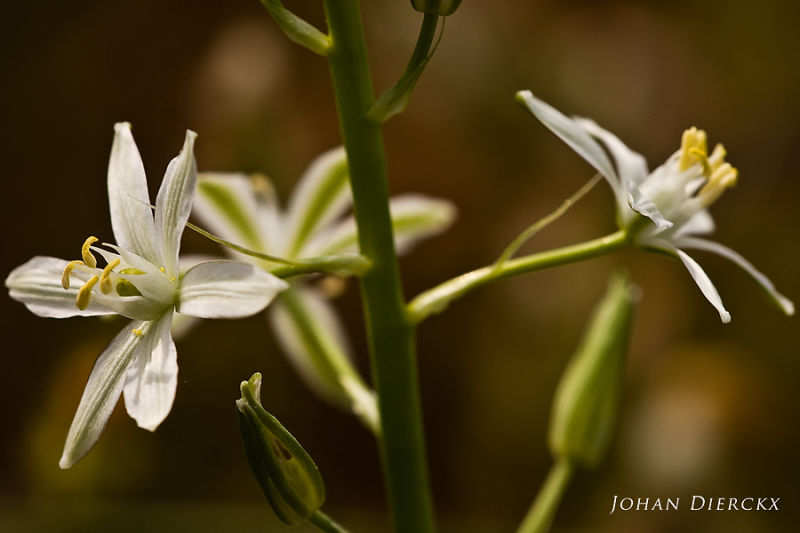 Posted by Johan Dierckx (Wijnegem, Belgium) on 2 April 2011 in Plant & Nature and Portfolio.

(info obtained from the Wild plants of Malta website)

Ornithogalum narbonense (Southern star of Bethlehem) is a perennial plant developed from oval, tunic-covered bulbs without outer bulbils. In mid winter the bulbs give rise to long, linear leaves which can be up to 15mm wide. They are somewhat bluish-grey, channelled and spreading out from the underground bulb. 3 to 6 leaves are usually produced and persists during the flowering phase of the plant.

The 30-60cm high scape produces a pyramidal raceme of 20-50 flowers that starts to blossom in April. The pedicels of the open flowers are spread out from the scape, but after the flowering period, the pedicels become apressed back to the flowering stem. Each flower has a 1-2cm long bract with a long-pointed tip. The buds are apressed to the flowering stem and are seen as oval bodies that are striped longitudinally in green and white.

The flower is about 20-25mm across and composed of 6 identical, narrow, non-overlapping, white tepals which have a green longitudinal stripe at the backside, sometimes visible as a pale green stripe from the upper side. The reproductive organs consists of 6 stamens surrounding a central, superior, bead-like, green ovary at the centre of the flower. The stamens have a broad, flap-like white filament with a tapering end that holds a pale yellow, rod-shaped anther about 4mm long. The ovary is somewhat shiny and have a white style shorter than the stamens

The fruit are initially green capsules held close to the main flowering stem. It is more or less oval with 3 prominent angles and about 1cm long. In May, the fruit dries, becomes straw coloured and splits open longitudinally in three compartments to expose out the shiny seeds. There is no special seed-dispersion mechanism.