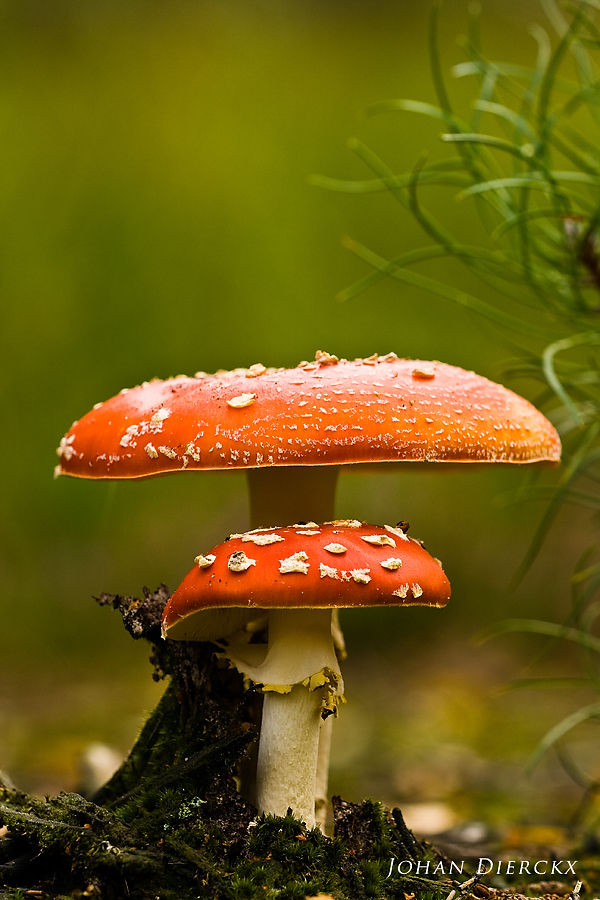 Posted by Johan Dierckx (Wijnegem, Belgium) on 23 October 2010 in Plant & Nature and Portfolio.

The "archetype of a classical mushroom" - Amanita muscaria (Vliegenzwam (BE) / Fly agaric (EN) / Fliegenpilz (DE) / Amanite tue-mouches (FR)) - is a cosmopolitan, poisonous and psychoactive basidiomycete fungus in the Amanitaceae family. Because this is perhaps the best known mushroomspecies in the entire world, I will not provide a description today.

But have you ever wondered why there is a reference to flies in the common names of this species ? Even the specific epithet in the scientific name derives from the Latin word "musca" meaning "fly". Albertus Magnus wrote in his work "De vegetabilibus" sometime before 1256: vocatur fungus muscarum, eo quod in lacte pulverizatus interficit muscas ("It is called the mushroom of flies, because crushed in milk it kills flies"). This practice has been recorded from Germanic- and Slavic-speaking parts of Europe, as well as the Vosges region and pockets elsewhere in France, and Romania.

Today the red-and-white spotted toadstool is a common image in many aspects of popular culture, especially in children's books, film, garden ornaments, greeting cards, and more recently computer games. Garden ornaments, and children's picture books depicting gnomes and fairies, such as the Smurfs, very often show fly agarics used as seats, or homes. Two of the most famous uses of the mushroom are in the video game series Super Mario Bros., and the dancing mushroom sequence in the 1940 Disney film Fantasia.

But there is no greater delight than finding this species in real nature and I just can't resist to make images of this species at least once every year ...

Yes, it is the classic mushroom we are all familiar with. I love that color! I had no knowledge of the fly references or connection. Interesting how a poisonous organism would be incorporated into children's stories.

@Julie Brown: I think it is because this species is so attractive due to the color and the white warts, combined with the worldwide appearance that it has become the "archetype" mushroom. You can't make failures in determination on this one. The poisonousness is also an opportunity to explain to children that eating mushrooms can be very dangerous ... (Glad you learned something on the fly-connection.)

@Shayna: Thank you very much, Shayna. Glad you like it.

@@Look: Thanks for your visit and your comment, Jean. Have a nice day.

@Curly: Thanks, Curly. Have a nice day !

@tataray: Thank you very much for your visit and your comment.

5 Stars.... for this exceptional image. The sharpness and light is excellent.

@Michael: I'm glad you like it that much, Michael. Thank you very much for your appreciation. Have a nice day.

@zecarlos: Thank you very much for your visit and your comment, Zecarlos.

this one is for a book ! perfect

@Veronique: Thank you for this encouraging comment, Veronique. Have a nice day !! Greetz !

@Christine: Thank you very much, Christine. Thanks for al the *. It is every year a challenge for me to make a better image then the previous year :-)

5 stars for the incredible composition, colours and lighting!

@Marilla: I'm realy honored by getting your 5, Marilla. Thank you very much for your appreciation. Greetz !

AAAhhh! Just beautiful. I love this photo. Wonderful composition. I love mushrooms, but on my plate I prefer boletus ;)

@Lucie: Thank you very much, Lucie. You are very right to prefer boletus above this one - he's rather poisonous :-)
(you can comment in German if you like, I understand most of is, but it is hard for me to reply in German, so my replies will be in English)

Congrats on the spotlight.. love the shot!

@Dutçh: I didn't notice untill now ... I'm honored! It gives me some courage to continue... but all the kind comments from wonderfull "friends" like you here on my "every-day-images" also do. So many, many thanks !!!

@Daniel: Thank you very much for your visit and your comment, Daniel.

@Sriraam Kalingarayar: It is always a delight finding this beautifully colored species. Thanks for your visit and comment, Sriraam.

@Loner: Thank you very much, Sonja. I'm always very happy with your very positive and encouraging comments. I think we have the same motivation in making images: we are both inspired and wondered about nature and want to show to "the world" how beautiful and interesting this nature can be - you are a master in bird-pix. while I'm looking for my subjects more into the small and close to ground world. It is very nice to meet people like you here on aminus3. Thanks for all your comments !

woohoo, congrats on the welldeserved spotlight Johan!!!
They look so plastically,excellent photograph with amazing colours!!

@daniela scharnowski: Many thanks, Daniela ! This group was so wellformed and wellplaced in the environment... just a unique occasion to make some good images of this beautiful species.

Congratulations for this spotlight...

@Olivier: Thank you very much, Olivier.

These always look so magical . . and what a perfect setting here. Congrats on the Spotlight !

@Ronnie 2¢: Thank you very much for your visit and your comment, Ronnie. It is indeed always a wonderfull species to find and every year I'm looking for them... Autumn isn't autumn without seeing those ...

@myky: Thank you very much for your visit and comment, Myky.

simply stunning...these are such a wonderful subject, and this particular image is really special

@Skyriani: Thanks again for your comment, Skyriani. Can this species be found in New Zealand too ?

Wow fantastic composition!
And as usual a very interesting description :)

@Demo: Thank you very much again for your comment. It is a common specimen but always so lovely to find and capture. Greetz for both of you !

Excellent capture of this couple!

@Vaido: Thank you very much for your visit and your comment on this one, Vaido. Have a nice day !

@Sina Sohi: Thank you very much for your visit and your comment, Sina.

Laurent from near Lyon, France

@Laurent: Thanks again for your time and I appreciate your comment, Laurent.