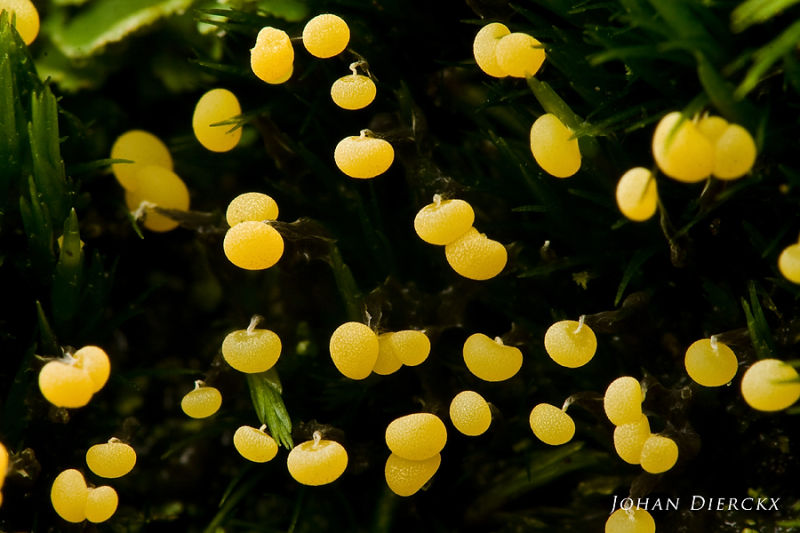 Posted by Johan Dierckx (Wijnegem, Belgium) on 21 October 2010 in Plant & Nature and Portfolio.

Physarum album (Knikkend kalkkopje (BE) / Baumwoll-Stielkügelchen (DE) / No other common names found ) is a slime mold in the Physaraceae family. I first like to mention this image is made with magnification 2/1 : 150mm macro (1/1) + 2x extender. - the actual size of the image is about 11.1mm x 7.4 mm !!!. (The green colored "plants" in the image are just little mosses.)

Slime molds were formerly classified as fungi, but are no longer considered part of this kingdom. Slime molds, as a group, are polyphyletic, but most of them are now placed in the Protozoa - Amoebozoa.

Describing the life cycle of these weird organisms is not easy but very interesting:

Slime molds begin their life cycle as amoeba-like cells. These unicellular amoebae are commonly haploid and multiply if they encounter their favorite food, bacteria. These amoebae can mate if they encounter the correct mating type and form zygotes which then grow into plasmodia (a gelatinous "slime" - the first part of the name of this group of organismes refers to this stage).

Plasmodia are multinucleate masses of protoplasm that move by cytoplasmic streaming. In order for the plasmodium to move, cytoplasm must be diverted towards the leading edge from the lagging end. This process results in the plasmodium advancing in fan-like fronts. As it moves, plasmodium also gains nutrients through the phagocytosis of bacteria and small pieces of organic matter. (So the slime molds actually can move around from one place to another ...)

When the food supply wanes, the plasmodium will migrate to the surface of its substrate, entering the next stage of its life cycle: transform into rigid fruiting bodies. The fruiting bodies or sporangia are what we commonly see, they superficially look like fungi or molds (the second part of the name) but are not related to the true fungi. These sporangia will then release haploid spores which hatch into amoebae to begin the life cycle again.

@Michael: Thank you, Michael. It is not obvious what you see in this image and I think most people just haven't seen slime molds in their life. That is why I like to give some more background info.

@Veronique: I'm sorry about the english info, Veronique. For me it too difficult to write this in french too. If you are interested, you can find some general info on slime molds (myxomycètes) on french wikipedia: http://fr.wikipedia.org/wiki/Myxomyc%C3%A8tes

marci from somewhere in..., Morocco

fascinating! to me they look like little lemon candies waiting to be picked and eaten by the school children~ beautiful shot!

@marci: Thanks for your visit and comment, Marci. Nice comparrison but these are less than 1mm big ... think children won't be pleased with these as a candy :-)

I thought of you : http://www.boston.com/bigpicture/2010/10/small_worlds.html

@Veronique: Wow - some amazing detailed micro-shots at that link ! Hope I sometime can manage these magnifications ... It is realy an honour you thinking of me while seeing those shots.

@Loner: Thanks, Sonja. Have you or your husband ever seen (and photographed) slime molds ?

You captured the texture on the individual yellow globules well, and the life cycle is really interesting. I'm curious as to why you added the extender to your macro lens. I have thought of doing this with my 100mm macro lens to get more working distance. Does this also give more magnification?

@Julie Brown: With my 150 macro at minimal working distance, I achieve a 1/1 magnification. Adding the 2x extender while holding the same working distance gives a 2/1 magnification. There is a significant loss of light and a bit of sharpness, but for me it works fine with these realy mini subjects - every yellow globule is less than 1mm !! So usually I setup tripod with only the 150 macro attached and make some images. Afterwards i just attach the 1.4 extender or the 2 extender. This way I only have to make some minimal corrections in the framing and in focus. Setting up with extender attached gives a very limited view, making finding your subject very difficult ... I did experiment with both extenders attached but the loss of sharpness in the image was just too big for me to be satisfied. Remember this is field-work - so every breath of wind moves the subject from the left to the right in the viewfinder ... sometimes it is just impossible to get an image :-)
Hope this provides an answer, Julie ?

They are like little lanterns, stunning capture and interesting text

@Christine: Realy mini :-) Every "lantarn" is max 1mm... It was actually my youngest son who found these ...