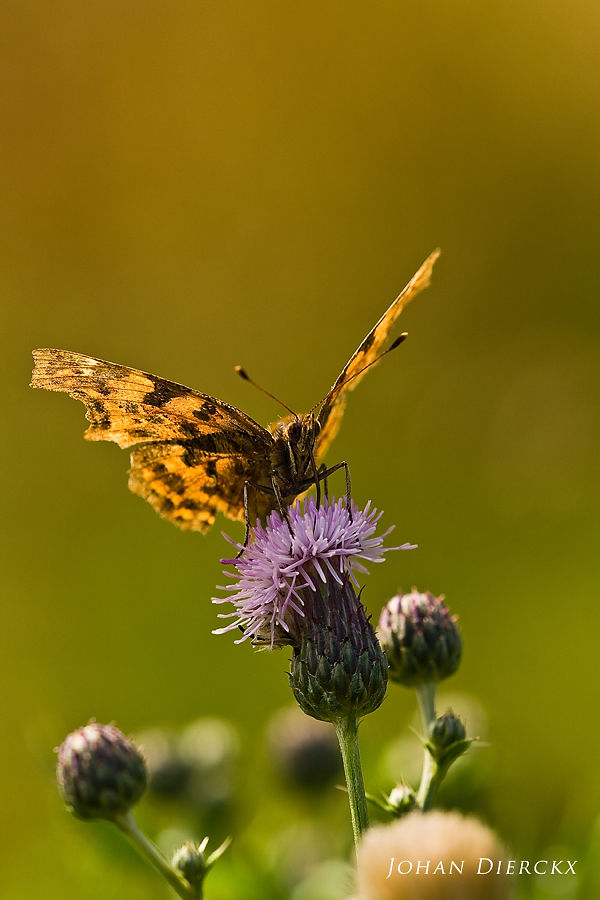 Posted by Johan Dierckx (Wijnegem, Belgium) on 28 August 2010 in Animal & Insect and Portfolio.

Polygonia c-album (Gehakkelde aurelia (BE) / Comma (EN) / C-Falter (DE) / Robert-le-diable (FR) ) is a species of butterfly in the Nymphalidae family. It has a white marking on its underwings in the form of a "c" resembling a comma ("c-album" in the scientific name.) on a close look it can be seen in the middle of the backwing in the image. The wings have a distinctive ragged edge, apparently a cryptic form as the butterfly resembles a fallen leaf ("Polygonia" in the scientific name: "polus" = many ; "gonia" = angle). Forewings are between 20 and 26 mm. This species can survive the winter in the adult stage, and adults are of two forms. The form that overwinters before reproducing has dark undersides of the wings, whereas the form that develops directly to sexual maturation has lighter colored wing undersides. The latter one can be seen in this image. Both forms can arise from eggs laid by the same female, depending mainly on the photoperiods experienced by the larvae, but also with an influence of host plants, temperature and sex of individuals. Research on this subject is still going on to get a full explannation.

@Judy aka Ladybug: Thank you very much for your visit and comment, Judy. Glad you like this image.

@KriKridesign: Thanks again for your comment. How are preparations for the exhibition going?

I frame my acryls on paper tomorrow... I made the first parttoday... Presented side by side with the editions photos, that begins to become very concrete suddenly!
Thank you for asking, and if ever you pass in Switzerland in November, you'll be very welcome! have a nice Sunday!!!

@KriKridesign: I'm sure that will be a perfect exhibition !

I like the backlighting on this one, Johan. The ragged wing edges do look like dead leaves. We call these butterflies "anglewings" in North America. The are often seen flitting about in the woods on warm late winter days, and are among the first butterflies seen in the early spring.

@Julie Brown: It is indeed one of those species that can survive during low temperatures in winter. In Belgium also this can be seen very late in autumn and very early in spring. Thanks for commenting again, Julie.