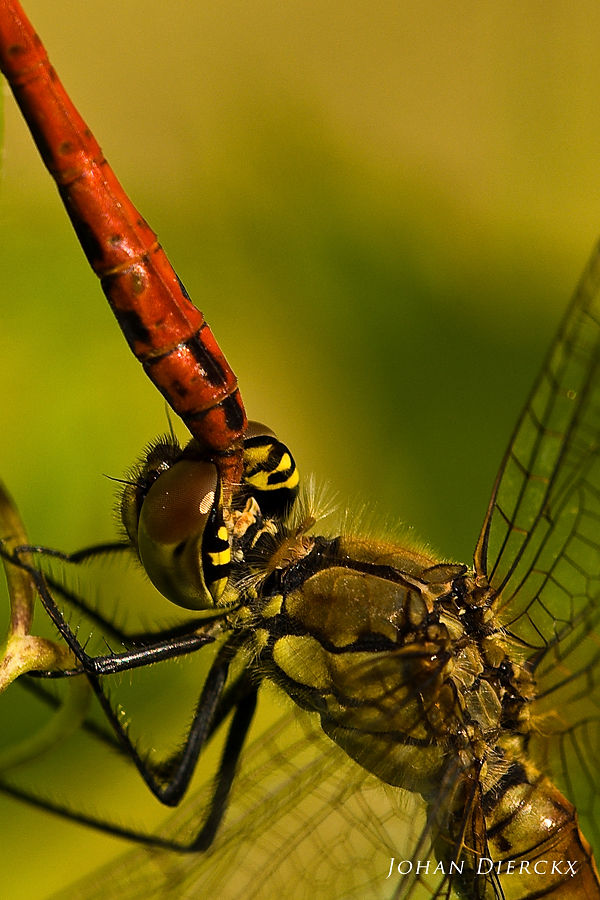 Posted by Johan Dierckx (Wijnegem, Belgium) on 25 August 2010 in Animal & Insect and Portfolio.

First of all: The yellowish brown specimen below is a female, the red section in the top of the image is the abdomen of a male... but why is that red abdomen in that position? What is happening? This image is all about mating, but this needs some explaining:

Most adult dragonfly males occupy territories near the water. These territories are defended against other males. When a female of the same species enters the territory of a male, the male grabs her behind or between the eyes. To do so, males have special designed appendages at the end of segment 10 (at the tip of the abdomen). (note: Female odonates also have appendages, but very small and functionless. These are called cerci.) In this image you can clearly see the apendages of the male grabbing behind the eyes of the female. The shape of the appendages of a species is typical for that species which prevents bastardising. For us it can be a great help to get the right determination of the species.
Two dragonflies being attached to each other this way are called a tandem - that is what you see in the image.

But of course the story continues:
Before forming a tandem the male transfers his sperm from the opening underneath segment 9 to the copulation device underneath segment 2 by making a loop of his (very flexible) abdomen. When the tandem is formed, the female reaches to this copulation device with her genitalia, located underneath her segments 8 and 9. Now a loop, called copula or mating wheel is formed. I showed such a mating wheel in this image). During the copulation, males of some species remove the sperm of earlier copulations (=other males) from the female’s genitalia.
After the copulation, the females start ovipositing. Most Sympetrum species remain in tandem during ovipositing. The other ones divide after copulation. With many of these species, males guard the females during ovipositing, hovering above them or sitting near them on a plant or stone.

Oh what a marvellously photographed detail Johan! Congrats on this! I only managed to catch a mating wheel of damselflies in total - with flash (-1ev on the flash) and without - and as to be foreseen - the natural light shots do look more natural...^^ the colours just don´t fit ;D

Re: your comment on the Queen of Spain - no I just magaed this single shot - much too much hectic butterflies on the bushes of lucerne that day - and I only met that species that time... but I got a lot more shots of the Kaisermantel ;D I also found some C-Falter (didn´t look up the name in english since....., too much shots to sort out atm....
My youngest will have his inschooling ceremonie on saturday and I´m busy like a bee...bzzz, daniela

@daniela scharnowski: Thank you for the compliments again. I almost never use flash in my images for the reason you give here and because natural light is so much richer then flash.

NB. I did find the Issoria lathonia on my trip yesterday ! Indeed a very active species and not very willing to show the underside of the wings. Got a few registration-shots but don't know if there will be some realy good ones - still have to sort (you know that problem... )

@Loner: For me it is also very fascinating to see all these details. I was lucky to get this close to get a good look and a clean shot of this. Nature is always surprising. Have a nice day, both !

Wow! Great shot of something that is hard to see and thanks so much for the explanation ^^

@kitty: Thank you very much for your comment on this one, Kitty.

chris B from Netherlands

@Veronique: nature always is ... Almost every photo-trip I discover something new ...

@Wolfen: Thank you very much for your appreciation. Glad you like it that much !

Wow!!
What a wonderful macro! Bravo!

@Shayna: Thank you very much for your visit and comment, Shayna.

beautiful...that is a really sharp image

@Sangeeth: Thank you very much, Sangeeth.

@Marilla: A once in a lifetime opportunity to get this close I think ...

The explanation you give here is incredible and also shows the uniqueness of nature. So glad we don't have to get all twisted around like that! ;)

The detail you have captured here is awesome, Johan. The dragonfly mating process is very interesting. Thanks for sharing this information.

@Julie Brown: You're welcome, Julie. For me it is always interesting to know what you see and I think most people have no idea about this image ...

@Magda: It looks like you visited almost my entire portfolio :-) Thanks for making time to comment on so many images and i'm realy glad you enjoyed looking at them. Greetz !